The first and foremost step in killing ants is to identify their nests and try to destroy them. For this purpose, one can use boiling water, by pouring it over the ant colony.

Another way is to attract the ants with some sugary product and use baking soda which will eventually kill them. Similarly, vinegar spray is also a very helpful method in getting rid of ants.

How to Get Rid of Ants Naturally Outside?

For this purpose, one can use dish wash soap which is available in everyone’s home. However, to protect woods Vaseline/petroleum jelly is the most effective method.

It is very important and necessary to stop the ants outside of the houses before they get into house and food. These ants can be killed naturally and by using chemicals as well. Below are some ways to kill ants and get rid of them naturally.

This ingredient can be found in every house and is found to be very effective for killing ants. It works by suffocating the ants once they intake it.

Powdered cinnamon, as well as its oil, can be used to kill ants. Powdered cinnamon can be directly dusted on the ants or ant holes and cinnamon oil after mixing with water can be sprayed on house entrance and in window spaces.

The procedure is as simple as mixing equal quantities of water and vinegar and spray on affected areas. In addition to above-mentioned methods, boric acid, lime juice, and Food-Grade Diatomaceous Earth are also non-toxic and human-friendly ways to tackle this commonly prevailing issue.

Fragrances of few home-based herbs, fruits, vegetables and spices are not liked by ants such as cinnamon, lemon, black and red pepper, garlic, and peels of cucumber. Furthermore, suffocating the ants, dehydrating them and breaking their cells is also an effective way to kill them.

Chalk is a product that can be easily available on any stationery shop as it is used in schools to write on blackboards.

Chalk can be used to stop their ants from entering into house by drawing a line on any possible entrance of ants i.e. doors and windows. Many of the users confirmed that the ants never cross the lines once they are drawn.

This is the best way to keep the ants out as precaution is better than treatment. This can be done by keeping the houses clean to make them less attraction for ants.

This means that there should be no food crumbs, sugar, or garbage anywhere in the kitchen. String the food especially the sweet items in airtight jars to minimize their aroma. In an uncleaned kitchen, you are providing food with the ants.

Some plants disliked by ants can also be used to repel them i.e. sage, mint, catnip, etc. The scent from these plants can be used to stop ants from entering the house by placing them on house entry points.

Some type of ants found to like greasy items and protein and peanut butter jam can be used to attract them towards it.

The ants can be killed by mixing the peanut butter jam with borax and placing it on the ants’ ways and ant trails.

The coffee powder can be dusted on the ants’ affected area because they dislike the smell of coffee.

The grounded coffee can be sprinkled on their entries to hone and can be placed on the face of ant holes to compel them to switch their residence elsewhere. It worked by repelling ants through its extremely strong smell.

In getting rid of ants, vinegar is very efficient. Mix the same times of water and vinegar (can be apple cider or white vinegar) to repel the ants and spray the solution in your garden on the ant hills.

Look at the entrance routes of ants, counter tops, windows and sinks in the home. The powerful vinegar scent will prevent the ants in vinegar sprayed areas.

Some of the ants have found to hate baby powder. The baby powder can be dusted on the house’s entrance and their indoor houses to repel them from entering into house or kitchen.

This is another common ingredient and can be found in every house. This ingredient gets rid of them naturally.

Ants after in taking cornmeal start to face the issue of indigestion. This can be made more effective after mixing cornmeal with something sweet.

Peels from citrus fruits i.e. lemon, lime, oranges, etc. can be used to get rid of ants by forcing them to change their place. To make the spray from fruit peels, boil the peels in water and vinegar in the same portions.

After boiling, keep it aside overnight, strain it spray bottle and then spray it around the entry points of ants. Repeat the activity until the end of every single ant. 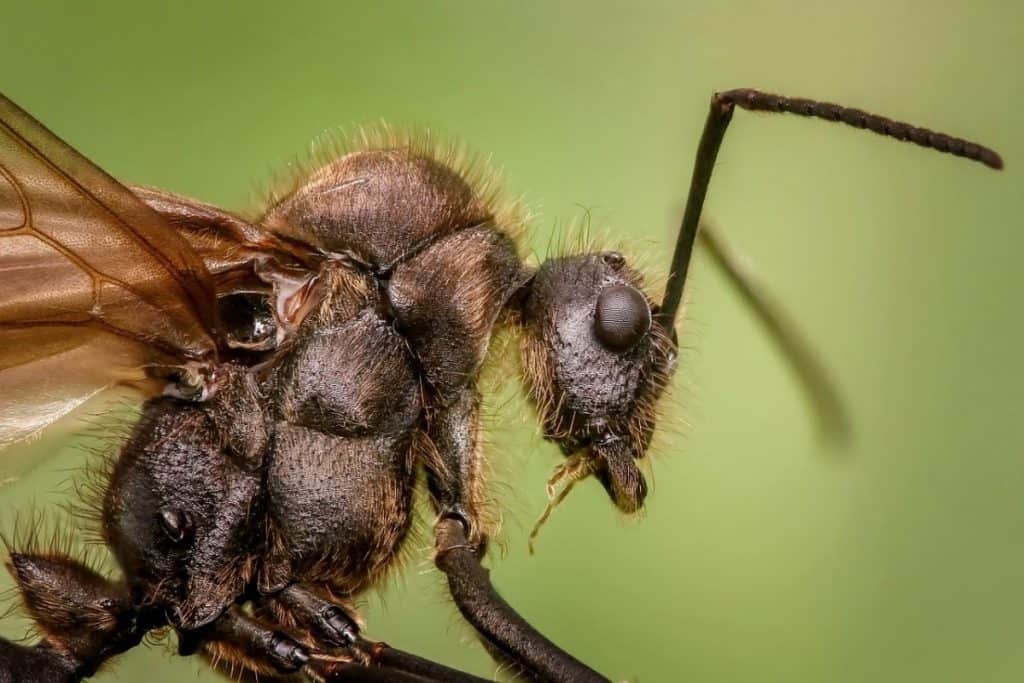 Different types of essential oils i.e. cinnamon oil, tea tree oil, citrus fruits oil, and other types of oils can be used as the pest controls.

In addition to red ground pepper and cayenne pepper, ants also dislike black pepper. This can be done simply by finding the ant holes and dusting it.

Another way is to build a wall of pepper to stop ants. Pepper spray can also be made by mixing pepper with water and spray it on the ants.

Cucumber is a food ingredient and can be used to get rid of ants because its taste is unpleasant naturally sometimes. For example, cucumber with bitter taste can be a good option along with normal cucumber.

To get rid of ants, simply put the peel from cucumber in the garden or where the ants’ colonies have located. The peels need to be replaced daily to get the best results.

Dish Washer can be found in almost every kitchen and this is an important element to remove ants. It works by suffocating ants first then kill them after dehydrating.

It can be used by mixing a spoon of the liquid dishwasher in a bowl of water along with some baking soda. Spread the mixture in the garden at places where ants can be found. This mixture can also be sprayed directly on the ants to kill them.

Due to its citric nature, the juice from the lemon can be used outside the house to make it ant-proof. The citric fragrance and acidic nature of lemon nectar help to dislocate ants from their paths.

The lemon nectar can be used by soaking cotton balls into it and putting them on all the possible entry points of ants in house.

An expensive way to kill or get rid of ants is using perfumes. The perfumes can be sprayed directly on the ants to kill them or can be sprayed to distract them from their paths.

This is not a general household item but can be used in the same way as the chalk can be used.

It has been found that the ants won’t cross copper, so, copper can be spread on the the entry of places where you don’t want the ants to come.

Any type of detergent i.e. liquid Dishwasher, Shampoo, soap, laundry washer, or any type of cleansing agent can be used to get rid of ants. Place the powder detergent directly and spray the liquid detergent after mixing with water at the desired places.

Garlic is a natural ingredient to get rid of any types of pest so as the ants. Garlic is an important element for human health as well but it also helps in getting rid of any insects or bugs within or outside the home.

The ants can be removed using garlic as its odor will not let the ants live at a place where garlic would be placed. This ingredient can be used by putting it in the garden or entry points of ants.

Blocking the ant holes and anthills using the white glue can be helpful to get rid of ants.

Applying glue will block their way and the ants will stay inside their homes and would be killed eventually or will change their location internally.

22. Identify their Nest and destroy it

Ants go in for meals at home, so it is better that they are stopped when they are outside the home.

Others will follow their scent path to the breakfast once they discover it. The colony where they nest must be located and destroyed to prevent them.

23. Signs of Ant Colonies Outside

Look at the yard outside the home and due to this they can get enter into the houses as well, so it is better to kill the ants naturally outside. The smooth, new soil on top of it can often identify black ant colonies.

Carpenter ants construct nests in wood that has been damaged or humid. Therefore, check the siding of your house, wood piers and damaged trees and stumps.

24. To Destroy It, utilize boiling water

By pouring hot water on it, is the simplest manner to ruin the colony or the nest. This calls for some care and planning.

If someone works alone, move the cooler beverage near the place and fill it with boiling water and then close the cover while heating another pot. Once he/she has sufficient water, open the cooler and tip it over the ant colony.

Salt is a pure home ingredient and can be used to dehydrate the ants by reducing water from their bodies.

The dehydration would kill the ants quickly and is also found to be a permanent method. The salt can be spread at the places where ants are found in the houses.

The wheat cream can appeal the ants and after consuming it, the stomach of the ants starts to expand.

The wheat cream results into disturbing the functioning of the ants’ stomach and after expansion, the stomach blasts and eventually ended up in the death of ants.

The spices work as a poison for ants that choke them and acquire their ability to sense that results in death. Powdered red chili can be used by sprinkling it in the ants’ ways.

Related: How to Get Rid of Sugar Ants

Some of the other insects outside the house or in the garden can attract the ants as well. Different types of flies or bugs can be the ones. Getting rid of such insects would automatically reduce the ants as well.