Maybe you’ve seen some black or dark spot around a corner of your house. The spots definitely look like insect poop. But definitely, it’s only your pet spider that has been around here. So, you’re wondering do spiders poop?

Simple answer is – YES. Similar to other creatures, spiders feed on a variety of foods. So, they defecate as a way of removing waste materials from their body.

A spider poop contains waste materials, semi-solid uric acid and the remains of ingested insects. They appear as white, brown, black or gray stains the size of a pin head. 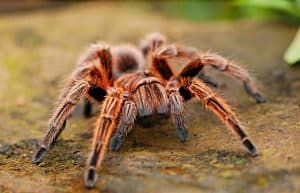 Spiders and spider poop can be quite hard to identify especially if you don’t know what you’re looking for. You might not even have a chance of seeing them poop.

Normally, spiders feed on small insects. And just like any other creature that eats, they have to remove the waste materials from their bodies. So, they poop.

But why is such a question of interest to many spider owners? Well, as well as a spider poops, it’s not obvious to see the poop or catch the spider in action! That’s because they don’t defecate as often as mammals do.

They have a slow metabolic rate which allows them to eat and defecate less often. For instance, a large spider like tarantula can go for almost a week without eating. The lesser it eats, the lesser it is likely to defecate.

It’s difficult to identify a spider’s poop if you don’t know what to look for. Spider’s poop is more or less the same as a bird’s poop. Before it dries, it appears as a white smear on surfaces. After drying, the color can turn to cream or light brown with tiny dark stains.

Usually, the poop is accompanied by a “bolus”. This is tiny ball consisting of the remains of their prey and web that is accidentally swallowed.

A spider poop resembles a bird’s poop but it’s smaller. Fresh poop will appear as a thick and white liquid with black stains. These stains are round in shape about 1/16 – 1/8 inch diameter. When it dries the color can change to grey, light brown or black.

The color and appearance of the poop varies from species to species. Size also varies depending on the species of the spider. Typically, large spider species like tarantula will defecate large amounts of poop. Tarantula’s poop tends to be more watery and less viscous causing it to dry and harden quickly.

Where to Check For Spider Poop

Well, spider feces can be found on any surface that you see them. However, large numbers of droppings will be found in areas most frequented by spiders.

Spiders make their webs in areas with less human traffic such as corners of the house, garage, cabinets, ceiling, and garage among other places. Since these are less frequented, spiders find it calm to spend time here and lay their traps. Thus, it is possible to find a lot of feces in these places.

Spiders feed on insects like flies which are associated with over 100 disease-causing pathogens. The most common of these pathogens include Salmonella spp, Enterococcus spp, Staphylococcus spp and Streptococcus spp.

However, there’s little evidence to show that spider poop contains some of these disease-causing pathogens. A study on a poop from a black widow spider showed no presence of harmful bacteria.

The researchers explained that the antimicrobial properties found in the spider’s venom killed the bacteria in the poop. However, it not does not explain whether poop from other spider species will be free from bacteria.

Like other insects, spiders readily pee to remove nitrogen, unwanted salts and regulate water in their bodies. But unlike mammals, spider don’t produce urine. Their structures are designed to produce uric acid which is cannot dissolve in water.

They excrete the uric acid as a semi-solid matter to help them conserve as much water as possible. Uric acid from the kidneys is drained into the stercoral pocket (connected to the digestive tract) through the malpighian tubles. It’s then excreted together with the poop from the digestive system.

How to Clean Spider Poop

Spiders will poop on your walls and other surfaces whether you have kept them for pets or you have a spider infestation. Thus cleaning the poop will be part of your daily cleaning activities. When left to accumulate, spider poops can disfigure your walls to very disgusting extents. So, it’s good to have some basics on how to clean spider poop. Cleaning spider poop entail the following procedure:

How to Get Rid of Spiders

There’re many methods you can use to eliminate spiders from your home.

Use of Commercial Products

Commercial treatments prove to be the most effective remedies for combating spider infestations. These include:

Natural ingredients can be helpful if you don’t want to use chemicals in your house. Although natural products are not as effective as commercial products, they can be used kill and repel spiders.

They are cheap and safe to use. So, you don’t have to worry about kids and pets. Below are some of the home remedies you can use kill and repel spiders.

The aroma of essential oils tends to be disgusting to many household pests. So, using them around your house can help in repelling spiders. The most commonly used essential oils include peppermint, lavender and tea tree oil.

They are quite easy to use. You just need to dilute the essential oil with water and spray around the house. Spray on the areas where spiders hide such as corners of the house, ceiling among others. Also, spray along possible entry points to deter from coming to your house. For more effectiveness, you can use a combination of two or three essential oils.

Vinegar is a common household cleaning agent. But, it’s also a good remedy for eradicating spiders. It contains acetic acid which is harmful to spiders and other pests.

You just need to create a solution of vinegar and spray on all possible hideouts. Spray directly on spiders to kill and repel them. Spray along possible entry points to prevent them from coming to your house.

Other home remedies you can use include lemon, black pepper, cloves among others.

Get Help from a Professional Pest Exterminator

A professional pest exterminator can give you the most effective and reliable solution to your spider menace. Although, the charges for such services are relatively high, they can at least save you time and give you a lasting solution.

They will be especially helpful in buying the correct pesticides and in the correct application of these products. More importantly, a pest exterminator will recommend some effective procedures for preventing future infestation.

Now you know that spiders will poop just like your pets and other pests. Spider droppings are not only a sign of infestation but are also a mess and health concern for you and your family. So, the first thing to do if you see spider droppings, is to clean the mess to avoid possible infections.