Spiders, being over 48,000  species, are an essential section of the earth ecosystem. These arthropods possess the open circulatory system that is, they lack “true blood” or veins to transport it. But, do spiders have hearts?

The simple answer is, Yes, spiders have 1 tube-like heart in its abdomen with one artery that carry hemolymph (spiders blood) and ostia (one-way valve) on its sides. However, the spider’s heart has no capillaries.

Spiders have the open circulatory system. The animal’s heart thus pumps the hemolymph into the sinuses and body cavity soaking its organs and tissues to give them hormones, nutrients, and oxygen.

Details: Do Spiders Have Hearts??

The spider’s bodies like the Brown recluse will be filled with the arthropod’s haemolymph that’s pumped via arteries into the sinuses (openings) that surround various internal organs. The arthropod’s blood would diffuse into the  individual cells and later collected into the spider’s heart.

Related: Do Spiders Have Brains?

Therefore, the spiders won’t have definite veins that’ll transport the arthropod’s Haemocyanin (blood) in the body. The Haemolymph has haemocyanin as opposed to the mammalian Haemolymph .

Haemocyanin has copper molecules compared to hemoglobin that contains iron molecules – the spider’s blood have a blue coloration.

But Haemolymph carry more oxygen – actually 17 times more than Haemocyanin. In addition, Haemocyanin has no cells like those in mammalia blood. 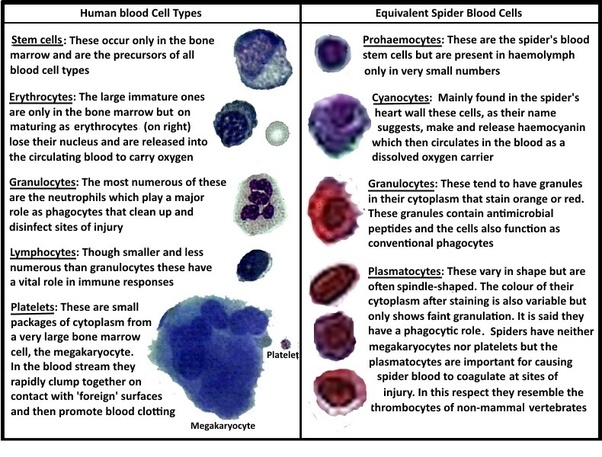 The heart of the spider is situated in abdomen, not  cephalothorax, which is on the upper section. This is also evident in other species having a abdominal cuticle that’s pale-colored. Check the best spider spray for indoors to control the athropods.

Also, its enclosed by a membrane that’s thin just like the pericardium around the mammalian heart. The spider’s heart will pump the haemolymph via the pedicel then to its cephalothorax through the anterior aorta (large artery).

To guarantee that the blood flows in one-way, the spider’s heart has simple valves. Also, the spider has a 30 to 200 heart rate (beats in every minute) varying with level of activity or species.

Related: Do Spiders Have Ears?

What Makes up the Spider Haemolymph?

The spider’s haemolymph is pale blue in colour since it doen’t have haemoglobin (iron molecules containing) in the human blood is the red color matter.

However, the haemolymph contain haemocyanin that carry oxygen and contain copper – making it look blue in color.

But the haemolymph is almost similar to the human lymph which tends to diffuse via the human tissues and finally returns to your circulatory system.

How Do Spiders Accumulate Oxygen?

Spiders lack the sponge-type lungs but have 1 or 2 book lung pairs for respiration that look like the fish gills. The book lung allow easy exchange of air carbon dioxide and oxygen due to its large surface area.

However., for spiders having 1 pair of the book lungs, its considered that the second one evolved into a tracheae system (fine tubes) looking like the bronchial and trachea systems in human lungs. To control the arthropods, use spider foggers.

But these will be kept open using the chitin as opposed to cartilage in humans. However, they have 1 0r 2 spiracles (openings) that are positioned in abdomen’s under-side between the spider’s book lungs and spinnerets.