Invertebrates and vertebrates follow the Haller’s Rule when considering the body size and brain comparison. For example, the ant’s brain makes up 15% of its body mass.

But, the difference is considerably bigger in spiders -m as outline din this Arthropod Structure & Development study.

Spiders are tiny arachnids that seem to be very intelligent for their small sized-body in web-weaving (some being even below 1 millimeter in body length). You can control them using spider sprays of spider foggers.

But, do spiders have brains? Well, technically, spiders have no brains in the manner anatomy defines “brains”. However, the arachnids have neural/ nerve cell clusters filling up many spaces in the spider’s cephalothorax. Notably, the”brains” of some spiders like Jumping spiders tend to extend down in their legs.

Details: Do Spiders Have Brains??

It would require a big brain for the small spiders to have such magnificent web-weaving prowess and weave webs that are even bigger than the arachnids.

A recent spider brain study by Bill Eberhard analyzed 9 species of spiders across 6 web-weaving groups. The outcomes of the study was that the spider’s body was inversely proportional to its brain size. Thus, smaller spiders have relatively larger brains.

In addition, for various spiders, their central nervous system occupied about 80% of their body spaces – it may also fill up the arachnid’s legs as shown below. Check how spiders evolved its spare legs. 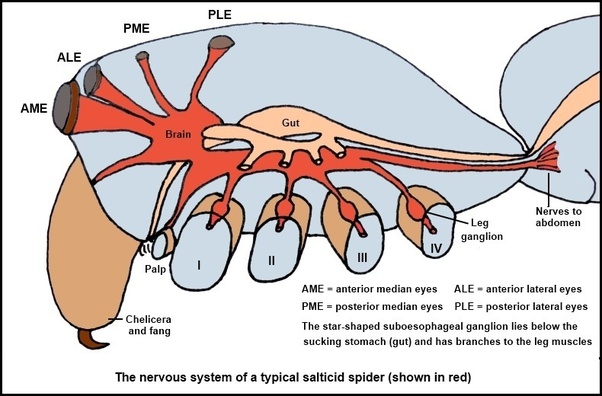 Further, the body of the spider, like Leucauge mariana, filled with its brain continue to grow and develop up to when it becomes an adult.

You’ll notice that some of the immature and tiny spiders tend to have a bulging and deformed body due to having an excess spider brain.

However, the adult spiders won’t have a bulge. This is because its brain cell will still remain relatively small. The brain cell will have nucleus containing all the genes of the spider – which occupy space.

Further, the axons and nerve fiber diameters can’t be reduced – even for the young spiders, since if they’re overly thin it’ll affect the flow of ions carrying nerve signals. Therefore, additional space would be given to the spider’s nervous system.

Related: Do Spiders Have Bones?

Too Much Spider Brain for a Small Body?

Definitely, you won’t consider that the spider’s brain tends to take up too much body space at the disadvantage of other of its organs. This aspect is yet to be examined scientifically.

However, by examining the spiders physically, you’d notice that the animals are definitely making a trade off to have a big brain spread even all over its legs.

A example of this is the Phidippus clarus spider that has been seen to have its digestive system (particularly of the adult jumping spider) is positioned in the animal’s cephalothorax (the body and head cavity).

However, for the baby Phidippus clarus, the cephalothorax is fully filled with the brain and thus the young one now tends to have its digestive system being less developed.

How Heavy is the Spider’s “Brain”?

The Haller’s rule states that as an animal’s body size reduces, the more its proportion of its body taken by its body increases. For example, 2-3% of the human’s body mass is composed of the brain.

Further, scientifically, the tiny animal brains take up 15% of the creatures biomass – however, some spiders tend to be much smaller comparatively.

However, brain cells also need high amounts of energy. Thus, the spiders will be converting most of the food they take up into brain power.

From a Costa Rica and Panama study on the spider’s brain extension, researchers resolved that the Nephila clavipes had a weight that’s a 400,000 multiple of  the small spiders.

Related: Do Spiders Have Ears?

How Do Large Spider Brains Help In Spinning Webs?

Its a key presumption that spiders require a large brain to create to super complicated webs. This is relatively true to some extend but not for all the spider species.

On the other hand, the researcher noted that the spiders require to be smart to become stealthy and sneaky – and thus this shows why the kleptoparasitic and other stealing spiders have a big brain too just like the web-weaving spiders.