From an outward look, moles appear not to have eyes! But how do they manage to dig tunnels and destroy our gardens?

Moles will do anything that is done by animals that have eyes. They dig tunnels, move around, look for food, mate and also evade enemies. But do they have eyes?

Short answer is YES – Moles have eyes which are covered by a fur and a thin membrane. These eyes can’t see things but can differentiate light and dark. Their eyes help them in knowing time periods and seasons of the year. 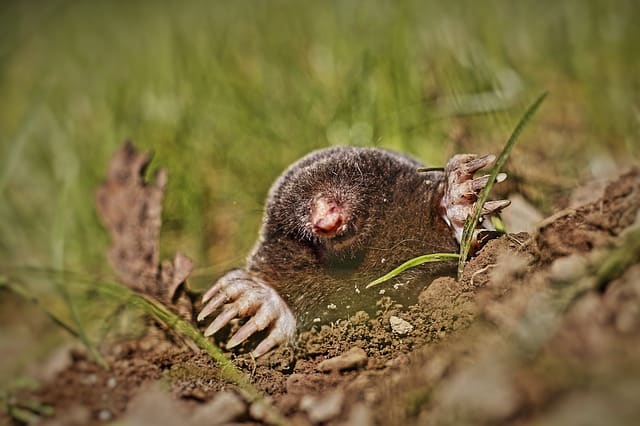 Details: Do Moles Have Eyes? Can Moles See?

Moles have eyes which are permanently covered by skin and fur. However, the fact that they shy away from bright light means that their eyes are capable detecting light.

Even without eyes, moles continue to wreak havoc in our beautiful lawns and gardens. Let’s see how they manage to do that!

When you dig out their tunnels, you expose moles to bright light. In response to this, moles will always seal the exposed tunnels to block light rays.

Notably, moles follow a regular routine from morning to evening. That means they know the time of the day. They wake early in the morning, rest at midday and get back to work at dusk before going to bed.

Researchers say that such a controlled routine is made possible by their eyes. Furthermore, their eyes help in knowing the time of the year. That’s why they only come out during spring in search of mates.

A typical research done on Iberian moles shows that although their eyes are completely closed, they possess structures similar to those of diurnal animals. These structures connect factually to the brain and help moles in detecting and avoiding light.

Research on the nature of moles’ eyes also focuses on the possibility of degeneration due to disuse. There’re assumptions of gradual loss in eyesight for animals living in dark places due to evolution. However, moles’ eyes have retained their function and do not exhibit any signs of becoming dysfunctional due to evolution.

Moles aren’t completely blind. They have eyes which are covered by a thin skin and fur to shield them from dirt.

Their retinal cells are also fully developed to enable light recognition. They can also see movements and shadows. However, they can’t see clearly.

How Do Moles Find Their Way?

Although moles can’t see images, they have adapted ways of finding their way inside their tunnels and when they come above the ground.

Perhaps their most important part for navigation is their nose. Their protruding noses possess touch receptors known as Eimer organs.

They find their way by touching the ground with their nose. These touch receptors have the ability to recognize objects and boundaries enabling moles to move in the dark.

How Do Moles Communicate?

Just like other animals moles are able to communicate especially during mating. How they do this without functional eyes isn’t a mystery!

They are highly adapted to vibrations and sound. They can produce and hear high-pitched sounds.

Moles can also use their scents to communicate with mates and identify food. They release powerful scents which can be easily picked their mates. These odors are quite disgusting to humans especially during mating.

Do Moles See Their Prey?

Moles don’t use their eyes to locate their food. They use their nostrils to locate foods such as earthworms, snails, spiders, centipedes among other small insects.

Research has shown that moles are some of the few mammals that can smell in stereo. Their nostrils can detect odors independently.

Different signals are sent to the brain, making it possible to discern the direction of the smell. Thus, they have the ability to differentiate food from other things by picking up the intensity of smell.

Although moles spend most of their time in their underground tunnels, they come out to look for mates especially during spring.

This makes them vulnerable to predators such as cats, dogs and birds of prey. However, they also have ways of evading predators. Since they have a poor eyesight, they won’t see predators.

However, their stereo sense of smell (both nostrils sniff independently) allows them to detect potential predators and retreat to their tunnels. With one sniff, a mole is able to tell there is a cat around. In fact, pouring soiled cat litter into holes made by moles can repel them.

Moles have eyes but they are not used for seeing things. They are however able to differentiate light and dark as portrayed by their tendency to avoid light.

Lack of functional eyes doesn’t prevent them from surviving in their environment. They compensate for the poor eyesight with a powerful sense of touch on their nose.

In addition they have a powerful stereo sense of smell. These two qualities allow them to navigate in their tunnels, locate food, mate and evade predators.