When it comes to wasps, just like other insects, they never just mature direct from eggs. The development stages varies. Maybe you could have come across an adult or baby wasp in your home or compound and it concerns you how they came to being.

So, the question here is, What is a baby wasp? This is a young wasp at the age between egg and adult wasp. In this stage, the baby wasp will mature from larvae, to pupa and finally turn into either young male drone or virgin queen.

The adult worker wasps will feed the baby wasp for a couple of weeks until it becomes an adult, after which it will be assigned responsibilities.

Let’s get into details. 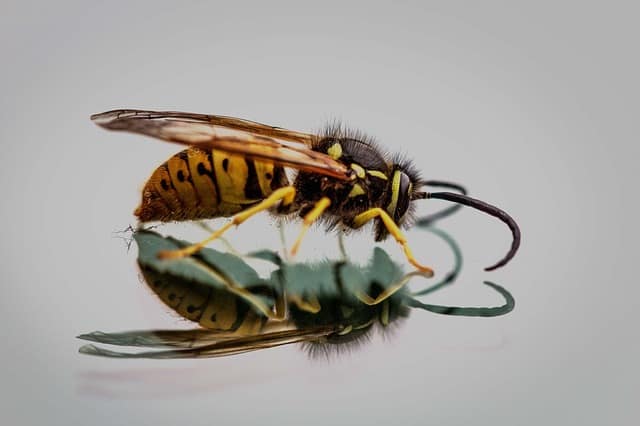 Baby Wasp – What are Baby Wasp?

An adult wasp goes through four stages in its lifecycle i.e. Egg-Larvae-Pupa-Adult. The baby wasp is the young (immature) wasp that is at the age between egg and adult.

The baby wasp is very inactive in most of its stages, especially while pupating where it’s dormant for some days before changing into young male drone or virgin queen.

How long does it take wasp’s larvae to hatch?

During onset of winter, the queen wasp mates before relocating to a new place.

The queen builds a new wasp nest/shelter (made of small cells, just like honeycomb) in a secure point there it intends to hibernate. The wasp nest will attain its maximum size (enough for brooding) at the end of summer/onset of autumn.

Queen wasp, then, lays drone eggs (unfertilized) and queen eggs in each cell. A queen wasp will lays 50 to 150 eggs per day.

Within 2 to 3 days, all the eggs will hatch into larvae – provided enough warmth is maintained within the wasp nest chambers/cells. The wasp uses water and fanning from wing to keep optimal brooding temperature. Each wasp nest is able to raise about 500 to 1000 baby wasps.

The larvae are fed by wasp workers (they are mainly female) or the queen wasp for 10 to 20 days while still in wasp nest cells.

What occurs in the development of Baby Wasp (Larvae, pupa stage and young adult wasp)?

Once wasp eggs hatch into larvae, the baby wasps begin to develop. Adult worker wasps feed the larvae with chews for 2 weeks while still in their cells. After gaining enough energy, the larvae changes to pupa.

Pupa stage of baby wasp is an inactive phase. The Baby wasp remains in its dormant stage (pupae) for 1 to 2 weeks. During this time, the baby wasp uses the stored energy for its growth and development.

After it achieves full development, the baby wasp naturally snaps out of their pupa shell into a young adult wasp.

The young adult wasp is fed by work wasps for 2 to 3 weeks before it transforms/becomes a full-grown adult. The adult female wasps lay eggs, which are not fertilized (these eggs hatch into drones only).

The new generation of adult wasps is given assignment of collecting food, feeding larvae and building more wasp nests.

NB: It is believed that drones cannot mate with queen in the same nest. For this reason, queen must move out when mating time comes. This reduces chances of inbreeding within the colony thus limiting chances of internal genes transfer for a given wasp nest.

Can a baby wasp sting?

The larvae stage of baby wasp is usually limited within cells of wasp nest, where they experience limited movement. The pupae is immobile (dormant) whereas the young adult wasp begin to learn new movements on emergence from pupa stage.

In addition, the young adult wasp has wings that are not fully developed. The baby wasp also needs to be fed for some days (5 to 15) before it’s able to fly a substantial distance.

What Do Baby Wasps Look Like? /How Do You Identify Baby Wasps?

You can use physical means when trying to identify the baby wasp. In this, you will look at various aspects and appearance of baby wasps (among thousands of baby wasps species) right in their nest/home.

Most common types of wasps (baby wasps) are the yellowjackets, paper wasps and hornets.

Using wasps’ shapes, nesting and colors will effectively help you identify various types of wasps (baby wasps). To achieve this, check the following in each feature:

Check for black and yellow colors on the body of the baby wasp (this is easier for young adult wasp). The European Paper and Yellowjacket baby wasps will have back and yellow abdomen.

On the other hand, European Hornet has reddish brown thorax and a black & yellow stripped tail. Be keen to observe a mud daubers (yellow and black) on the baby wasp.

NB: These stripes/color marks may be very tiny to be seen via naked eyes – you will need to have a hand lens or microscope to aid your observation.

A baby wasp measures between 0.2 to 1.5 long – for different type of wasp species. This may slightly change; however, it shouldn’t go beyond 1.7 inches.

You will even realize that some adult wasps may measure within this bracket.

By observation, you can tell a baby wasp since they are not as active as adult (don’t measure adult wasps)

Paper baby wasp species has a spindle-shaped waist and long legs. Moreover, it has a mud dauber and a thin elongated body.

The European Hornet baby wasp is characterized by narrow waist, hairless and smooth bodies. They rarely turn while in their development stage.

Generally, most baby wasps look like an inactive lump held with the wasp nest. You will find that wasp’s cells seems as if they are closed. However, if you take a close look, you will find developing baby wasps.

Could figs be of help to baby wasps?

No! Though adult wasps pollinate most figs, it is not possible for baby wasps to carry out pollination at that young age. However, adult wasps are closely involved in the life cycle of fig tree.

While adult wasp tries to get food from fig, it in turn help the fig tree to growth as well as carry out pollination (this is known as mutualism).

Wasp pierce the fig fruit and gets in where it die of suffocation, decompose and its carcasses get converted into useful protein. A colony of adult wasps may attack fig fruits causing it to burst.

In some cases, the pregnant queen wasp may die in the fig fruit after having laid eggs.

These eggs may only hatch if the fruit will get dry (otherwise, plant convert them into protein). Afterwards, the baby wasps will be separated from fig seeds during harvesting. Your Fig bars or jellies do not contain baby wasps.

How can you kill/destroy baby wasp?

The most efficient way of destroy/killing baby wasp is by removing their nest. This can be achieve by using any of the techniques listed below:

1. Knocking off baby wasp nest and meshing it.

This is a quick way of killing baby wasp. You will need a rod or long stick, then, push off the baby wasp nest. Once it falls off, mesh it using the wooden mallet or hammer.

You must be care in this method. In case you happen to kill adult wasps in the nest, they release a chemical that attract other wasps in the vicinity for attack (dispose the remains).

Engage the baby wasp professional to help in their removal. This is important as these people carry specialized equipment.

Using paper bag or plastic container, cover the baby wasp nest tightly (No air should get in). Then, leave it for 2 to 4 days.

This will suffocated all the baby wasps and adult ones. You can do the covering at night while wearing protection gears in case of wasps attacks (sting).

This can be carried out early in the morning and dusk for 2 to 4 days.

NB: Keep off sprays used in this method away from children.

Never try to remove baby wasp nests by burning (may cause fire due to its material) or pouring water (whether hot or cold).

How Can Baby Wasps Die?

Yes! Once the queen has reproduced the fast generations, it relocates to another place where it hibernate or begins another colony. The colonies of wasps left in the previous wasp nest mostly die off during winter due to fall in temperature.

The Wasp nest can also be abandoned by the entire swam of wasps in search of food and breeding ground elsewhere. Wasps do not return to their previous wasp nest once they vacate – even if they return, they prefer building a new wasp nest adjacent to old one.

Most worker wasps live for less than a year while the queen wasp can live for 1 to 3 years. In case they have not reproduced, the wasp nest is left behind after their death (this is a rare case though it happen)

Baby Wasp is a young wasp at the age between egg and adult wasp. In this stage, the baby wasp will mature from larvae, to pupa and finally turn into either young male drone or virgin queen.

The adult worker wasps Feeds the baby wasp until it acquires its full maturity. Once they become adults, baby wasps become workers who search for food, feed larvae and build wasp nests.